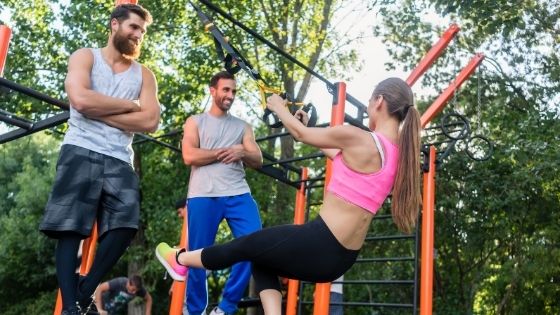 When asked, many people may assume that multigenerational fitness parks are public parks with a mish-mash of facilities and areas designed to appeal to different demographics within the same geographical area. However, that’s not quite true—so, if that’s wrong, then what are multigenerational fitness parks? Read on, and we’ll expand upon the value of these parks and why they should be more commonplace.

Many multigenerational parks look similar to what you’d normally expect from a playground, but they appear bigger and sturdier. Swing set hardware kits, seesaw equipment, and other playground staples, such as slides, have been engineered to accommodate adults as well as kids to allow parents to take a more active role in playing with their kids. In addition, fitness equipment that adults will be more familiar with is built alongside the playground equipment to allow for more traditional methods of exercise and physical activity.

The primary benefit of multigenerational fitness parks is that they encourage your community to keep healthy and physically fit because they’re free and convenient for the public to use. However, they aren’t styled as some kind of outdoor gym. Instead, they present exercise in a way that’s fun and engaging, which is something that both adults and kids need in order to find their motivation to exercise.

These parks are no riskier than your traditional public park or playground. However, because they’re so inviting and presented as something to have fun on rather than exercise, the largest risk adults will have is pulling a muscle or injuring themselves in some other way because they pushed their bodies too far. Even for something like playing at the park, it’s important to remember that warming up and stretching beforehand is still a good idea to prevent injuries.

Now that you know what multigenerational fitness parks are, we hope you’ll take into consideration investing in such an amenity within your own community. These parks are for the benefit of your residents—they gain physical exercise the chance to bond with their kids. Since the parks are built with both children and parents in mind, parents can play alongside them rather than having no other choice but to sit at a bench and observe.