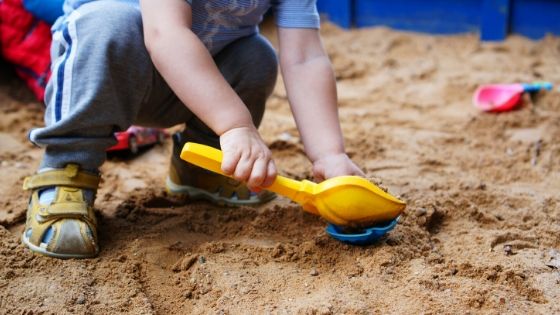 Sandbox, sand table, sand garden, sandpile—all words that describe the grains of sand gathered together for the enjoyment of children and adults alike. For centuries, people have turned to the now-known sandbox as a way to build and form structures, and more importantly, a way to develop the stages of play. Below, we’ll discuss a brief history of the sandbox, from its origins with Friedrich Froebel’s sand garden to the bounded environment it is today, where children can explore and construct, and smash and build tirelessly. Read on for more!

As we mentioned Friedrich Froebel played a large role in the transformation of sandboxes for children’s use. Before this time, sand tables were typically used for war diagramming, but in 1847, when Froebel received a letter from an old student about an idea of sand for play, he took the idea and ran with it. The idea transformed from there, where he created a water-tight box, at least a foot deep, set on legs with rollers, and filled with sand.

From there, in Germany, Empress Frederick worked to designate certain areas of public parks as play areas for children. These playgrounds would have sand hills upon them for children to play. Adults enjoyed seeing the joy of children playing, and the idea of sandboxes spread from there.

As the number of sand gardens increased around the world, you’d find more of them in schoolyards. This is how the idea of “outdoor gymnasiums” came to fruition in 1889. Typical playground equipment like swings and seesaws were found over sand in the West End and throughout Boston. In 1897, Boston mayor Josiah Quincy VI was inaugurated, and he stated that every ward should have a playground—the city followed through and more sandpiles were created.

Evolution of Play in the Sandpile

With the spread of sandpiles throughout the country, people could see how children grew and developed in their sandbox play. It typically began with excavation and discovery, as the children got used to the touch of sand and how it could bend and move to their will. After a time of seeing how different elements interacted with the sand, such as sticks and bricks, children began to use their imagination. With a bit of water, they could build structures they deemed castles, knots of wood were horses, and whittled sticks were men. This imaginative building is essential to their development in the stages of play.

The children here, as time went on, were the designers of their play. Their autonomy was contagious, and the joy of sandbox play spread like wildfire.

Sandboxes have been a place of knowledge and development for children and adults as the years go on. Though they’re not necessarily as popular as they once were, these piles of sand have withstood the test of time as a way for children to strengthen their imagination. You’ll still find sandboxes at some schools, and when you head out to the beach, you’ll find people of all ages enjoying the grains of sands beneath their toes.

If this brief history of the sandbox caught your attention, and you want to get one for your school, backyard, or apartment complex, turn to Discount Playground Supply. We have everything you need for a fun children’s sandbox. Reach out to us for any other playground, park, or dog park needs, as well!