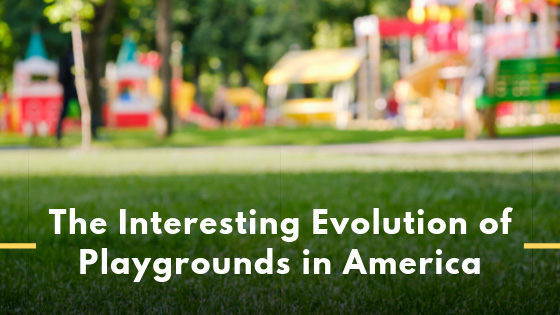 Playgrounds didn't always look like the ones we see today. Below, we briefly outline the evolution of playgrounds through the decades.

The concept of a playground originated in Germany. The Germans created designated play areas called “Sand Gardens” to get children off busy roads and teach them how to play correctly. Generally, the gardens had formal supervisors, and they had no equipment besides sandboxes. Additionally, playgrounds weren’t in public spaces at first—eventually, parks and schools built their own play environments on their properties.

This type of play area came to the United States in the late 1800s; the Boston Sand Gardens was the first supervised playground in America. San Francisco also included a playground in their Golden Gate Park. In the early 1900s, the Playground Association of America (PAA) formed to encourage a Playground Movement, which caused playgrounds to dramatically increase in popularity. The PAA developed construction standards, and they also discussed dividing playgrounds into separate spaces for boys and girls. President Theodore Roosevelt was also an advocate for playgrounds.

As time went on, playgrounds began to incorporate theater and games such as hopscotch, Red Rover, and tug-of-war. Early playground equipment included merry-go-rounds, teeter-totters, and the maypole.

Playgrounds After the War

After World War II, the desire for free play grew. Junk playgrounds, which were later called adventure playgrounds, were born. The equipment for these play areas was made from recycled materials. While junk playgrounds promoted imaginative play, the trouble was they really weren’t kid-friendly. They needed to be standardized, and regulations over the years paved the way for the modern playgrounds we see today.

Playground equipment we see now didn’t come around until the 1980s. Companies began to specialize in constructing structures from metal; then, they gravitated toward rubber, steel, and many other materials. Companies placed more emphasis on manufacturing both safe and creative equipment for children. Now, playgrounds are more accessible than ever to children of all ages and abilities.

If your park’s playground seems outdated, take a look at our playground outdoor playsets. Discount Playground Supply is committed to constructing durable and safe playground equipment.